For the last couple weeks at Make Studio, artists have been working on PowerPoint presentations to get ready for (Power)Pointy: An Evening of Artful Powerpoint Presentations on Friday, April 7th from 6:30-8:30pm at Make Studio’s Showroom Gallery as part of Hampden’s First Fridays. 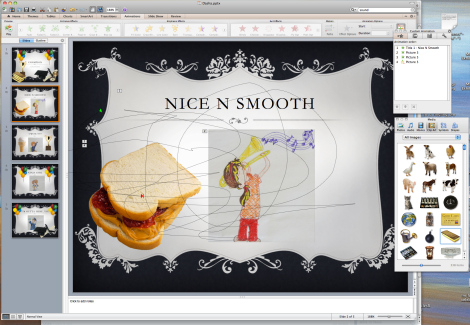 “I mostly made PowerPoints for school before. They were more informational. This new one is more fun. While in school, I worked on ones by myself and in groups. I have enjoyed making PowerPoints with animations before. I haven’t made a PowerPoint since I’ve been out of school. School was sort of my inspiration for this PowerPoint. I reflected on four significant parts of my school years. I had a pretty sweet four years in high school. Middle school was pretty great too. My hair changed a lot during those days.”

“I am working on this new PowerPoint in a new way. I drew images for pictures on the slides. I feel I have more control in creating the image by drawing it. I’ve been having lots of fun working with the animation tools, sounds, and clip art! My favorite part so far has been adding pictures.

“I know a big part of the PowerPoint is presenting it. I wrote out what I want to say, but I think I will just wing it. I know the stories I am going to tell. I may practice…but I probably don’t need to.

Come see Dasha’s final product, as well as several of our artists’, at this Friday’s event!