Particularly during a cold snap like the one we’re experiencing now in Baltimore, warm, cozy, and creative clothes put Aimee on cloud nine, hence this story that she wishes to share….

The Story of the Onesies

As the years passed I have owned a few onsies to keep me warm in the frozen tundra that is my apartment. My boyfriend is almost always hot, he’s like a werewolf. He always uses the argument “you can put on more clothes on but I can’t take off my skin.”

This has led me to extreme onsie measures. I own several now and I try to only buy animal mammals, or fish types. I don’t really do plain normal onesies.

I’d say my first animal type one was the rainbow unicorn I received as a present. Then I tried to buy a narwhal one on Amazon, but it was sold out. Instead I received a dragon one. I was disappointed, but my boyfriend thought it was an upgrade, so it grew on me.

Then I bought an Umbreon onesie and after a bit I ordered another narwhal. This time I got what I ordered! Yay! Since then I have been buying several from Wish where they are a lot cheaper, but take a bit longer to get to you. I have gotten a Snorlax, a frog, Angel from Stitch, a bee, a pig, a bat, a parrot, a panda, and lastly the one I am wearing today, which is a reindeer, that I bought at Kohls while buying professional work clothes for interviews. 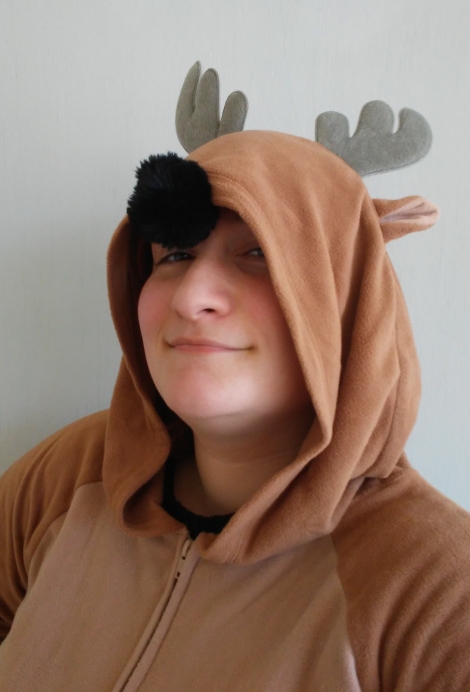