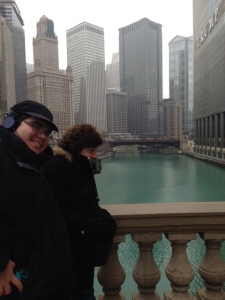 Recently, Make Studio artist Garrett Seidman traveled to Chicago from Baltimore on his very first business trip. When he’s not making art at the studio, Garrett finds glitches in video games for a company called Wargaming. When explaining his job, Garrett said, “I smoke out the bugs in the software.”

The software company invited its employees to a holiday party this month in downtown Chicago. Garrett did not hesitate to talk about what he thought was the most exciting part of his trip…

“I danced at the company holiday party. They had belly dancers and I danced with one of them. I was brave. I went up the stairs and danced with her in front of two hundred people. I was kind of afraid that I would get in trouble, but I took the risk. I did not end up getting in trouble and coworkers came up to me afterward and told me that’s the ballsiest thing I ever did! They also gave a speech to motivate people to play World of Tanks.”

Garrett met a lot of new people and felt proud about how he did it.

“I introduced myself by saying, ‘Hi. My name is Garrett Seidman and I work at Wargaming. I represent people with autism who are working.’ Everyone said they were very impressed.”

He represents himself in the same way at Make Studio: as a person with autism who is actively participating, and being successful, in the working world. Garrett has used the skills he has learned from Make Studio in many ways.

“At the Make Studio I have learned how to be patient, how to focus, and how to interact with coworkers.”