Jerry Williams makes paintings, drawings, sculpture, and often uses found materials. The Ringling Brothers’ Barnum & Bailey Circus is a major theme in his artwork. Jerry’s been going to the circus with his family since he was a little kid. He loves watching the animal trainers interact with the animals and the ringmaster leading the show. He goes out of his way to meet his favorite circus stars, and he collects all kinds of merchandise. Two years ago he became friends with two very special elephants, Sammy and Banko. Jerry is looking forward to the new surprises of this year’s show and celebrating his birthday there on March 30th. 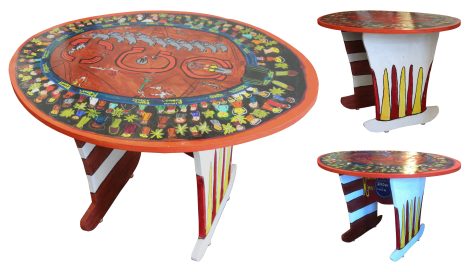 For Make Studio’s fourth anniversary exhibition, All Fo(u)r One and One Fo(u)r All, Jerry decided to take on a new challenge: a circus-themed coffee table. Jerry has never designed furniture before! On the surface of the table is a bird’s eye view of the arena, filled with visitors laughing and cameras flashing. The table legs are made to look like top hats a ringmaster might wear. Currently the table (and several other pieces) are on view in the exhibition Amazing Marvels, a show featuring work inspired by the circus, sideshow or carnivals acts at Art Enables’ Off-Rhode Gallery in Washington, D.C. The show will be up through April 18th, 2014.

Here are a few more examples of Jerry’s work that focus on the spectacles and performers that can only be found at the circus!

Spirit of Ringling Brothers and Dragon

There's still time to get in the race! In fact, there's now even more time...