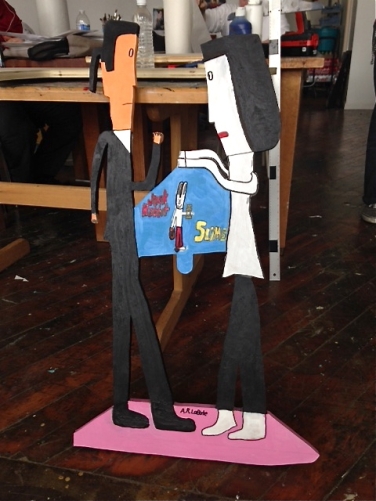 For Make Studio’s 4th Anniversary Show Tony Labate decided to try several new techniques for his special project. For starters he increased the scale of his latest characters, so they stand three feet tall instead of three inches. He also decided to do three dimensional wood cut-outs instead of traditional illustration. Tony chose to return to familiar subject matter by popular demand: the characters of Pulp Fiction. For this piece he depicts Mia Wallace and Vincent Vega, played by Uma Thurman and John Travolta, from the dance scene at Jack Rabbit Slim’s….

“Pulp Fiction” is one of my favorite movies. Today, Tuesday February 18th, 2014, John Travolta turns sixty years old. The Jack Rabbit Slim’s diner in “Pulp Fiction” reminds me of the 1950’s style restaurant called Fuddrucker’s. My favorite part of making this piece is finishing it. I enjoyed thinking of John Travolta’s movies and the television show “Welcome Back, Cotter” while working on the sculpture.