Attending studio events, and other festivities, tends to put Kareem on cloud nine.

As a sneak peek of his contributions to Make Studio’s upcoming 9th anniversary exhibition, here Kareem shares the recently completed tribute piece to A Star is Born, his newest favorite movie. He shared some thoughts about his cinematic experience: 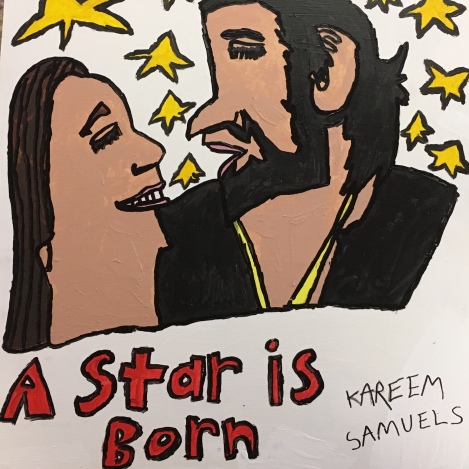 Especially because it's the Partyman's birthday, we thought it was the perfect time to share his TEN talk (and, because we are all missing the subject of the presentation). (As a reminder...) 10 Make Studio artists created commemorative anniversary video presentations to each finish the statement: "When someone thinks of Make Studio, they should think of ____________." Jerry, who joined Make Studio in early 2010 as our very first artist, discusses the topic of "our studios", a subject he knows very, very well! Possibly better than anyone else. Don't worry, Jerry, your office is waiting for you and will be exactly as you left it when you return! (Link to our youtube in bio.) #tenyearsmakingitwork #makingitworkbystayingathome #studioduringlockdown #shelterinplace #happybirthday #theshowmustgoon #partyman