As part of the festivities for Make Studio’s 5th Anniversary, artist Dan Keplinger (possibly better known as “King Gimp” from the 1999 award-winning documentary of the same name) did a live drawing demo. Make Studio artist Tyrone Weedon was particularly excited about meeting Dan and wanted to share his experience of meeting the King. 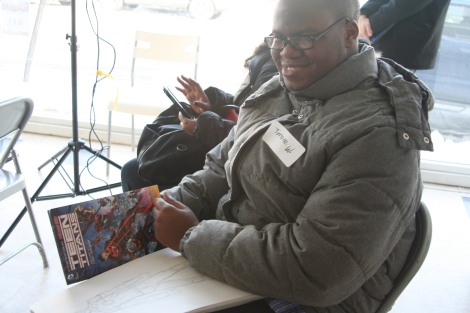 “On the beginning of Make Studio’s 5th Anniversary show in the new studio, me and my sister (Charlene Myers) went inside the studio and saw a lot of people who are looking at other artists’ artwork on display, eating snacks, music playing, and socializing. While having a conversation with other people and talked about my art gallery and all of a sudden, one artist who caught my eyes. A disabled man who is doing his artwork on the floor with an acrylic paper on it. 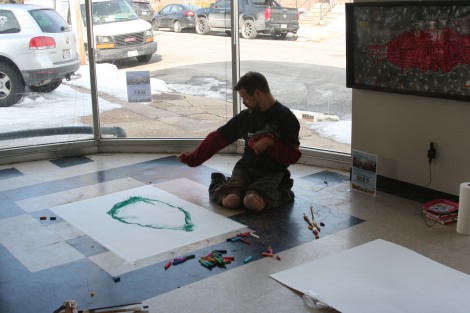 “As I sit there and watch just like everybody else is watching as this man creating this incredible art piece and I finally figured out who he is! I can’t remember his name, but I know his face on the HBO special a long time ago. The wheelchair and the headgear that has a paint brush he used to paint and also a pointing stick for typing a laptop or an computer. I was calling one of the staff I worked with named Erin and asking who is this famous artist and she said “His name is Dan Keplinger also known as ‘King Gimp’.” Everything made sense, I knew him from TV and now for the first time in person! “

“I was scared of speaking to him because he is the famous legendary artist who break out all barriers in the art world and I don’t want to interfere his work and I don’t want to cause any trouble. I speak to one of Dan’s entourage that if it’s okay talk to him. The girl with eyeglasses politely said yes. The girl walk around and approach Dan and told him that I want to speak to him. I was nervous and Dan look at me, I told him that your artwork is amazing and I seen your documentary a long time ago and it was a honor for meeting you. Dan struggling to speak to me and said “Thank you”.” 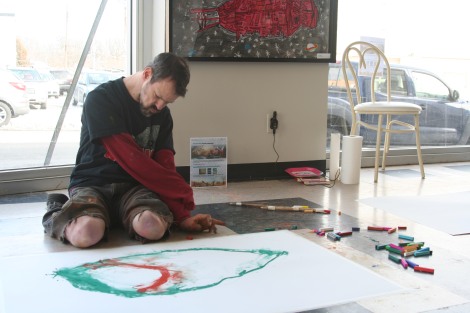 “Dan has Cerebral Palsy, but that didn’t stop him from making beautiful masterpieces. He’s a inspiration to artists that has disabilities and a motivation speaker that disabilities didn’t stop people for making their dreams come true. He’s a fighter that never gives up and didn’t care what ignorant people says about him or thinks. Real people has disabilities to over come odds that gets in the way and to become somebody. Dan is down to earth and he’s very nice. I’m thinking about Dan and he’s inspires me to become a famous artist to make my dream come true. I think about movies that inspires disable people, Movies like: Masks, Forest Gump, and Radio. It was a honor to have a photograph with Dan. I feel blessed that accomplish everything from working to selling artwork. It was like a breath of fresh air, my mother looking down at me and said “Good job, son. I’m proud of you.” I wish that I could meet Dan again so we could have a conversation a lot more. All hail to King Gimp! End.”