This blog is a review of the Season 1 episode of Futurama entitled A Fishful of Dollars. In the episode, Fry becomes rich and gains 4.3 billion dollars after discovering that over the course of the thousand years he has been frozen that his account had grown a large amount of interest per year. 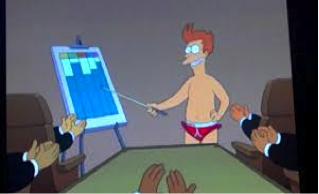 Futurama manages to be a smart show, even when it focuses on a dumb character and I think that’s where another one of its strengths come into play. The animation is gorgeous, but it is only one of many things I admire about the show.

The episode plays on themes of nostalgia and gaining material possessions while realizing the importance of what is already gained that can’t be purchased with money, like friends and loved ones. It also shows that some things can’t be bought back even with money, but can still be missed.

In the episode, Fry dreams up an advertisement for Light Speed brand briefs. In the year 3000, people’s dreams can now contain commercials just like on billboards, television, movies and in the sky. Fry and his coworkers know that they don’t have to do everything the commercials tell them to, but rush off to buy a whole bunch of stuff anyway. Yes, even a thousand years from now, commercials are still a primary source in determining what to buy. The only difference is that we’re seeing those ads during Rapid Eye Movement sleep.

When Bender is caught shoplifting Mom’s valuable Robot Oil and arrested, Fry goes to the bank to get the money for Bender’s bail and realizes that during the time he was frozen that his measly 93 cents from the 1990s has now turned into a whopping 4.3 billion dollars. The teller even has to blow the dust off of the machine in order to gain access to it. Apparently, nobody is freaked out that someone is actually able to gain access to a thousand year account. Someone who would probably already had been fossilized by now is able to still go to the bank and use their dusty old account and everybody is oblivious to this. It’s that brand of oddness that plays into the hilarity of the situation.

Back to the episode, Fry is now a billionaire and treats himself and his friends to various things that range from surprisingly fun to incredibly clichéd and ridiculous (Including top hats that make you realize “just how rich someone is”). Shooting priceless artwork with lasers is now a thing rich people do, instead of purchasing them since, in the year 3000, nobody cares about paintings. 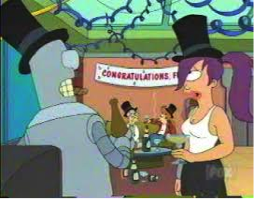 Then, Fry treats his friends to a pizza, but causes the robot waiter to explode from confusion when he asks for anchovies as a topping. Anchovies are now extinct, due to Zoidberg’s species (who are dangerously addicted to them) suddenly fishing and eating them all. I love Zoidberg’s reaction when he’s called out on this and he suddenly cracks and confesses that he and his people ate all of the anchovies. It’s what I feel is the first of many glimpses into Zoidberg’s hilarious eating which comes into play in countless situations, some more random than others.

Bender leads Fry to an auction that allows people to purchase stuff from his time, including an antique robot toy (Rock Em Sock Em Robots). One of the items is surprisingly a can of anchovies, the last existing ones ever. Fry and an old lady named Mom get into a bidding war over the can, which Fry wins after buying all of the other stuff in the auction as well. This act of greed and depriving an old lady of something disgusts everyone, even the auctioneer.

When Fry’s friends try to tell him living in the past isn’t healthy, he rejects his friends in favor of his new retro 20th century stuff. Mom and her sons plan to bankrupt Fry out of his money so he’ll sell Mom his anchovies. They are easily able to rob Fry of his money when they find out the pin number he foolishly says out loud to everyone when they trick him into thinking it is still the past. But Fry decides not to sell the anchovies and serves them to his friends on a pizza for them all to eat, thus ridding the world of anchovies for good. However, Zoidberg, the only one who liked them, threatens Fry for seconds and the episode ends there.

It’s not just the jokes that impressed me. It was the writing. The writing manages to really get out everything it has to say about nostalgia and friendship. The prospect of someone being able to fool someone out of all of the money in their bank account as Mom’s sons did with Fry and their ridiculous plan was just worth its weight in laughs. But what helps sell the moment even further was the fact that the plan was actually working.

Fry’s brand of stupidity works for a lot of laughs and that’s due in large part to the fact that the show tries new things and situations to put Fry’s stupidity into effect.

Again, the show can focus on an aggressively dumb character and still maintain its wit and intelligent humor. That’s what episode 6 did and it managed to succeed at it.